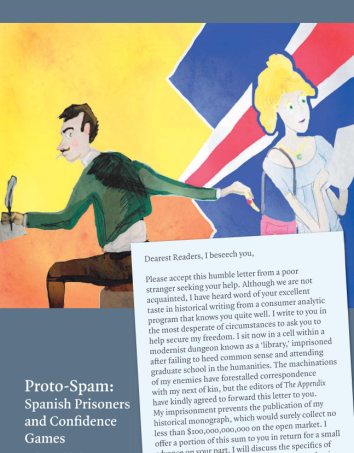 The Zimmermann Telegram is one of the most consequential messages in human history, but it’s also a message that tends to get glossed over in most history books in a manner some might call “yada yada yada” history: giving you a quick cause and effect, but not including any of the mechanics of how that particular cause led to that particular effect.

The conquest of India is an incredibly popular topic, but what makes it REALLY interesting is the fact that it’s popular not only with average people, but also professional historians…Here’s a topic that is so complicated and nuanced that it’s impossible to develop an authoritative text about. Plus, this event has something that all historians love, and that’s a big ‘ol paradox.

There tends to be a close association in people’s minds between England and espionage. This usually relates to modern history and pop culture, whether we’re talking about Bletchley Park, James Bond, or spies coming in from the cold. Yet England’s association with espionage and intelligence work goes back much further than most people realize.

Even if you enjoy notoriety in life, there’s no guarantee your story will live on past your death. Even incredibly famous world leaders and celebrities can be forgotten within the span of a few decades. Sometimes, even a few years. That’s what makes Cleopatra’s story so remarkable.

“Trusteeship” was the greatest buzzword in the British imperial world from the end of the First World War to the era of decolonization. For advocates, it served as a useful shorthand for the altruistic, benevolent, and paternal motivations that supposedly inspired the prolongation of colonial rule after the Great War. For critics, the term was an insidious euphemism for the continuation of empire as usual, and an excuse to delay the establishment of self-government in the so-called dependent colonies.

This lack of international experience and global reach among police in Europe and the United States, however, did not mean that such skills were entirely lacking from police on the world stage. In particular, the British Empire already contained a set of colonial police officers that could claim both global reach and experience. Often portrayed as brutish and inept compared with their metropolitan counterparts, British colonial police possessed a greater range of policing experience – both in terms of situation and geography – than almost any officer serving within Britain itself.

The enduring success of the prisoner swindle relies as much on the mark’s sentimentality and need for emotional connection as it does on their desire for a quick buck. The successful prisoner, then, is one that can combine a too-good-to-be-true offer with a compelling narrative that the victim can, literally, buy into.

In America’s Gilded Age, there was no greater friend to the Robber Baron – and no worse enemy to the working man – than the Pinkerton National Detective Agency. Yet the reputation of the Pinkertons stands in stark contrast to the history and politics of the agency’s founder, Allan Pinkerton. The story of how a progressive, working-class activist from Scotland founded an organization synonymous with ruthless capitalism represents one of the great paradoxes of American history.

This collaboration, which has existed in one form or another for almost a century, represents perhaps the deepest and most durable connection between Britain and the United States. It has lasted longer than most defensive alliances, extradition treaties and trade arrangements. It also seems to run deeper than many of the two countries’ shared cultural assumptions – with the exception of the common love for period dramas, the Beatles, and Benedict Cumberbatch. The secret nature of this collaboration, however, often obscures its presence and importance from the public and from historians. Nevertheless, there is reason to see this security partnership as the sole basis for the oft-derided “special relationship.”

“Cops and Robbers: Why The Church of Scientology Hated Interpol,” The Appendix, May 16, 2013.

The release of this damning document led to a swift response by the Church, which filed suit against Interpol and the Metropolitan Police in German court. The Church followed this by organizing a propaganda campaign against Interpol that attacked it as a tool of totalitarianism, emphasizing in particular the organization’s Nazi past.

Writing on Video Games and History

For Don Rawitsch, who would go on to work for MECC for almost 20 years, this latest iteration of Oregon Trail is most welcome. For an educator who gave away his greatest lesson plan, the goal wasn’t to be authoritative, but to create a platform that could be used by others and iterated on—with better technology but also better history.

Whereas your white player character in Oregon Trail gets to follow a well worn path to the west at a leisurely pace without much beyond environmental hazards to worry about, the position of the black player characters in Freedom! make you feel as though you have to reinvent the wheel with a gun at your head every time you start a new escape.

“Playing in the Past,” Play Stuff Blog, The Strong National Museum of Play, December 9, 2019.

Set in 2030, Tiberian Sun asks two difficult but important questions: are we better off if the “good guys” win? And, is this version of Earth, on the verge of ecological disaster, even worth fighting over? These questions, like the game’s FMV sequences, could easily be laughed off by players in the halcyon days of the 1990s. Players in 2019, however, must wonder if Tiberian Sun represents a schlocky relic of a bygone era or a prescient prediction of an impending reality.

If we can recognize the importance of Shakespeare’s use of history, can we not do the same for a game developer that just netted $725m from a historical fiction? If yes, what do Rockstar’s games tell us about American history?

“The hottest video games of the year can be great teaching tools,” The Washington Post, November 27, 2017.

Games like Call of Duty: WWII represent the front lines of historical memory in the digital age, and dismissing them as simple entertainment does not displace their positive or negative influence.

YouTube, arguably the most important medium for the video game community, is famous for harboring sexist and racist videogame broadcasters who often feature historical games, particularly games in the strategy genre. Part of my goal with History Respawned is to turn the tide of purposeful misinformation regarding history … I believe that a more diverse group of scholars creating their own videos may be more effective in building a more diverse audience and establishing a more accurate historical memory among game players…

I’ve spent the past four years pondering historical video games with other scholars on YouTube for my series History Respawned, but in that time I’ve done very little to reach out to the developers responsible for making these games. What draws them to set their games in history? What kind of problems did they encounter while adapting the past? Did they conduct research for their adaptations? Finally, is there space for scholarship in popular games? GDC17 provided the perfect occasion to begin to answer these questions.

NPC chatter has become a hallmark of the open world genre, but rarely does this chatter go beyond “hey, watch it!” or “ahhhh, he’s got a gun!” Mafia III includes this same sort of chatter, but it also features NPC dialogue infused with an impressive amount of historical detail related to the game’s setting in 1968. As a history professor, I picked up Mafia III expecting to see this historical detail reflected in the game’s main story. Instead, I learned that much of Mafia III’s best historical material is delivered by nameless cannon-fodder.

Nothing remains in our collective memory without occasional reminders, even events as horrific as the First World War. In an ideal world, these reminders would be distributed by expert scholars presenting judicious and nuanced historical narratives. Yet writing as one of these scholars, I am only too aware of how little purchase my voice has in modern culture. Historians begging to build a memory for the First World War often cannot choose how that memory will be erected.

“Backward Compatible: Gamers as a Public History Audience,” Perspectives on History, The Newsmagazine of the American Historical Association, vol. 54, no. 1 (January 2016).

Members of the gaming public may be interested in intellectual thought, but very rarely are they interested in the traditional trappings (such as books, magazines, or newspapers) of that thought. We need communicators who are willing to engage the public, but also able to use the 21st-century mediums the public engages with.

“How Thinking Like A Historian Can Help You Understand Games, From The Witcher 3 to Assassin’s Creed,” Rock, Paper, Shotgun, July 22, 2015.

The ferocity of these controversies signifies that historical games have become more than thoughtless diversions. They are capable of imparting and validating historical meaning to the people that play them.

with Bryan Glass, “‘X’ Marks the History: Plundering the Past in Assassin’s Creed IV,” The Junto, February 5, 2014.

More than any other Assassin’s Creed game, Black Flag plays fast and loose with the historical record. It skews away from accuracy in favor of fun at almost every turn. Yet even as Black Flag thumbs its nose at the concerns of academic history, it nevertheless succeeds, perhaps better than any previous title in the series, in giving players a sensibility of the age.

The BioShock series has become something of a bellwether for the video game industry and the release of Infinite has led to several “state of the medium” pieces online (listed below). What, then, does BioShock Infinite indicate about the future course of video games? On the one hand, we see a familiar reliance on violence and the first-person perspective, but on the other hand, we see a game that engages with complex, historically laced themes.

“Pinching and Swiping, or How I Won the Digital War,” Notevenpast.org, February 4, 2013.

I didn’t know it at the time, but these gaming experiences represented my first foray into historical research: I checked out books from the public library on particular campaigns so that I could provide the proper context and I studied my father’s world atlas to make sure I had the topography correct. I didn’t just want to have fun. I also wanted to get it right.

“‘You have died of dysentery’: History According to Video Games,” Notevenpast.org, November 14, 2012.